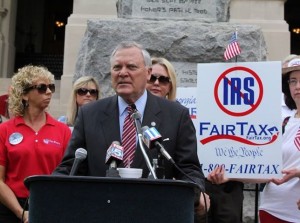 On the same day he was publicly corrected for asserting that $737 million in cost overruns at two new nuclear plants were the fault of environmental litigators, Gov. Nathan Deal said he would be pleased if Georgia Power absorbed some of the added expenses.

Deal made the latter comments to WSAV on Tuesday. Emphasis ours:

“There are certainly points to be made on the side of those who say the company should absorb more of the cost and not pass it on to rate payers. Certainly, if that could be done, that would be a good solution,” said Governor Nathan Deal. “But I think we can’t lose sight of the fact that those two nuclear reactors will be the first new nuclear reactors in the United States in several decades and it’s — in my opinion — a necessary impact of keeping the state of Georgia with adequate power resources.”