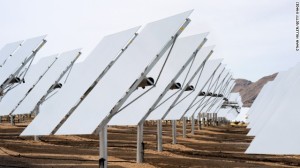 by Denis Hayes and Scott Denman
(CNN) — 4/22/14 At long last, this Earth Day we celebrate the true dawn of the Solar Age. That sunrise is hastened, here and abroad, by the slow demise of the once-touted “too-cheap-to-meter” Atomic Age of nuclear power.