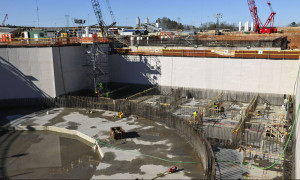 by Ray Lightner
GRIFFIN 2/8/14 — The Municipal Electric Authority of Georgia (MEAG) is asking the Nuclear Regulatory Commission to allow it to create up to three wholly owned subsidiaries to help MEAG fund the expansion of the Vogtle nuclear power plant.

Southern Nuclear Operating Company operates Vogtle and is making the request, which would allow MEAG to create the three subsidiaries, dividing up MEAG’s 22.7 percent share of the electricity generated by the two new reactors.