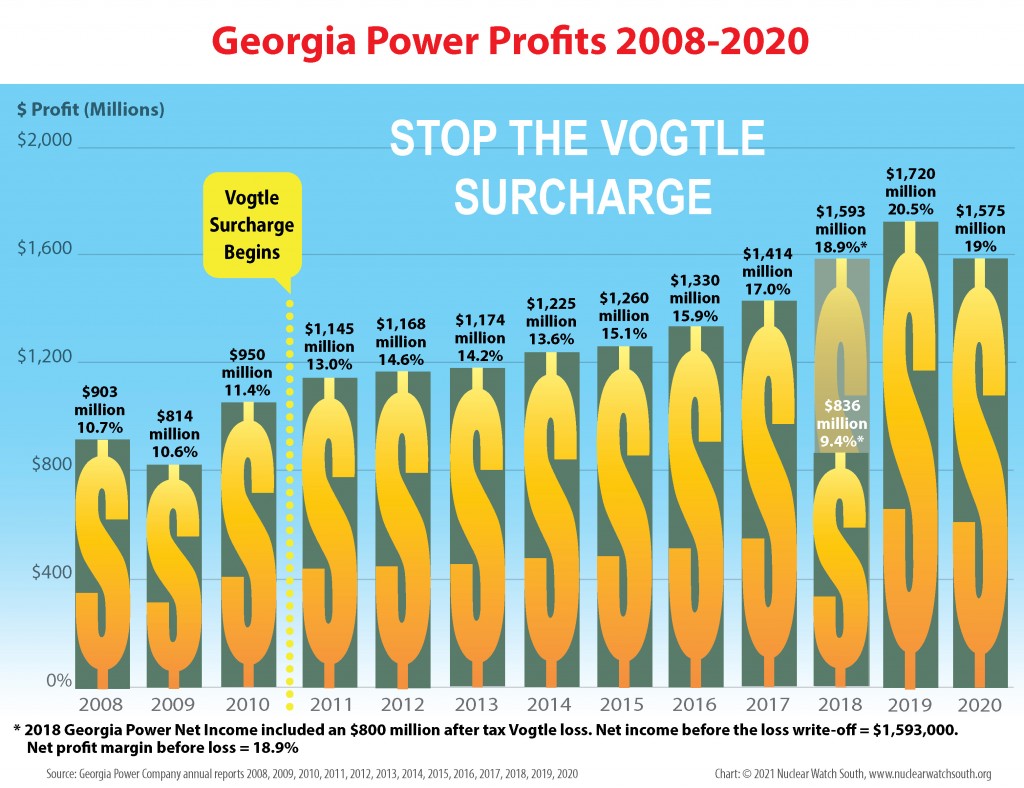 WHO PAYS CWIP?
CWIP (Construction Work in Progress) is a tax that Georgia’s small business and residential electricity consumers are being forced to pay to construct two additional nuclear reactors at Plant Vogtle in Burke County, GA. This “Nuclear Construction Cost Recovery” fee adds 10% to your electric bill every month. Georgia Power is obligated to list the tax on your monthly electric bill. All other Georgia electricity providers (with a small handful of exceptions) are partners in the construction of Vogtle 3 and 4 and are also charging their customers the hidden CWIP tax although they may not list it on the bill. This tax will continue to increase.

WHO IS RESPONSIBLE FOR CWIP?
In 2009, the Georgia General Assembly passed “Georgia Nuclear Energy Financing Act,” making it legal for Georgia electric utilities to charge customers in advance to construct the nuclear reactors. The Georgia Public Service Commission (PSC) subsequently approved Georgia Power and other owners of Plant Vogtle to charge the CWIP tax which will be collected during the whole construction period, no matter how long it will take, and allow Georgia Power and the other Vogtle owners a guaranteed profit with a protected return on investment of 10.95%.

WHO PROFITS FROM CWIP?
Nuclear power is so risky that Wall Street has rejected financing new reactors and insurance companies still will not insure the technology. CWIP makes building new nuclear reactors possible by protecting Georgia Power and its partners from all investment risk by investing their customers’ money instead. With CWIP, electric customers take the risk of construction delays and cost overruns. Georgia electric customers finance the construction, even if the reactors are never completed, and the power company is guaranteed a profit, even on their cost overruns.

CWIP IS A RIP!
According Georgia Power’s latest report it is $2 billion over budget and 39 months behind on Vogtle construction. Since the reactor owners are not financially responsible, they have no incentive to finish the project on schedule and the guaranteed profit structure actually encourages cost overruns! If Vogtle 3 and 4 fail, the ratepayers’ money is simply lost. But if Vogtle 3 and 4 are ever completed, Georgia Power and its parent company Southern Co. will reap handsome profits. Electric customers are forced to invest in the risky reactor project without receiving any dividends or investor benefits. The State of Georgia is socializing the costs and risks, and privatizing the profits, of this $16.5 billion nuclear reactor project. This is a blatant example of corporate welfare.