by Ivan Penn
3/2/15 TAMPA — Duke Energy Florida on Monday said it wants to suspend most of the remaining nuclear charge on customers’ bills for the canceled Levy County nuclear plant until it resolves a half-billion lawsuit over the project’s contract.

The proposal would give customers at least temporary relief from a $3.45 charge on the average bill each month, beginning around June 1, about six months earlier than expected.

But there’s a catch: While the proposal, if approved as filed, would save customers money in the short term, they might face far greater costs in the long run.

The proposal involves some complex maneuvering by the utility. At issue is Duke’s lawsuit with the contractor for the Levy project, Westinghouse Electric.

3/2/15 TALLAHASSEE, Fla. (AP) – One of Florida’s largest power companies says it will go ahead and drop a nuclear power fee now charged to customers.

Duke on Monday filed a request that asks state regulators to approve a proposal to drop an average $3.45 a month charge from bills. A spokesman for Duke said the charge could be removed as soon as this summer.

Duke announced in 2013 it was abandoning plans to build the plant in Levy County on Florida’s Gulf coast.

Some of Duke’s billing practices have created an outcry. There is a push during this year’s legislative session to place additional restrictions on utilities. 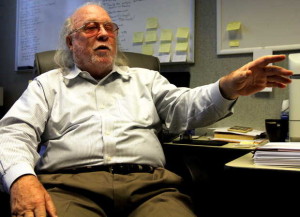 ampton
3/1/15 HATTIESBURG, Miss. — Thomas A. Blanton is a theologian. And a student of Jean Lafitte.

An oilman. And an environmentalist.

A rock ‘n’ roll impresario twice over. And a protest singer with an unreleased album.

A fan of Mark Twain. And Uncle Remus.

A community organizer who can direct the distribution of thousands of campaign cards a day. And an unsuccessful candidate for the Public Service Commission.

A strict constitutional constructionist. And a Democrat.

A cancer survivor. And a professional hell-raiser.

He resists labeling. You could say he is eclectic. Even his friends allow he’s a bit eccentric.

With white hair flowing down his back, an eye lost to cancer and a beard gone wild, he’s the image of a pirate. But he says the only thing he’s interested in raiding is the corporate boardrooms of those interested in pocketing a fortune at the expense of the little guy, or the planet.

He’s well known in south Mississippi as the man who took on Mississippi Power and the state’s Republican political machine over the baseload act and subsequent rate increases for electricity meant to pay for the Kemper County power plant.

Read the whole article: The Sun-Herald